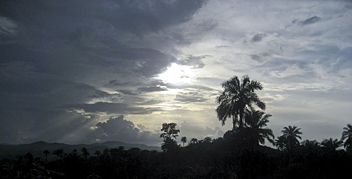 Liberia lies on the west coast of Africa, and was founded in 1822 by freed slaves from the United States. Today, English is still the official language. Sadly, recent civil war has caused large scale social and economic devastation, from which Liberia is now recovering.

The inland Sapo National Park contains a very large area of primary rainforest. You probably need special approval from the Forestry Development Authority to enter, and it appears there are no facilities, roads or trails.